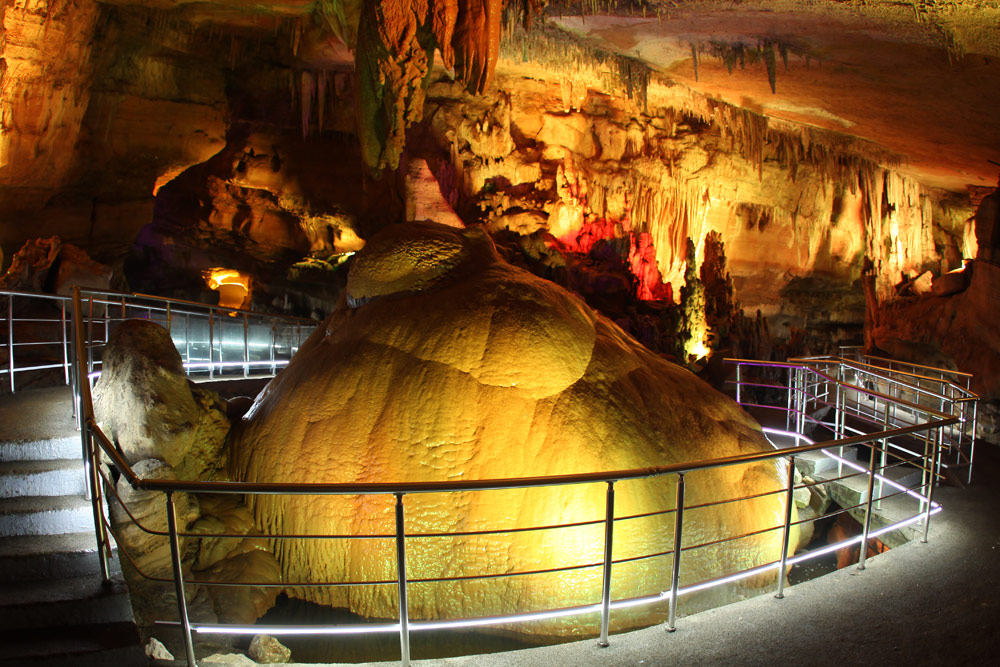 The cave was discovered July 15, 1983 expedition of the Institute of Geography. Vakhushti Bagrationi, although the entrance in the form of a large arch was known long ago [1]. Since 1985, the cave has been converted into an excursion facility. In 1989, an excursion route was already laid in the cave, a 150-meter tunnel at the exit was punched, temporary lighting was installed and construction of above-ground buildings began. In 1990, the design of the excursion cave equipment was closed [4].

In March 2007, managers of French excursion caves were invited to the cave, who estimated the condition of the cave as an excursion facility and the amount of necessary work to complete the project. In 2009, tests of LED and music equipment began. President of Georgia Mikhail Saakashvili, who examined it in 2010 and said that it should be called a cave of Prometheus, since Prometheus was chained to the mountains in about this area [5]. During the year, the cave was landscaped - the building was completed, construction of which began in 1989, a power line was built to the cave, roads from Tskhaltubo and between the entrance and the exit from the cave were built. German firm GermTec GmbH & Co. KG. KG in the cave were allocated 15 sightseeing areas, each of which was equipped with dynamic lighting. The sections between the zones are illuminated by static light [4].

On May 26, 2011 it was opened for visitors [6]. Once again visiting the cave on the eve of the opening, Saakashvili expressed confidence that the new attraction would serve the development of tourism business in Georgia, noting that before that there were only two caves in Georgia - "Sataplia, which we finished recently and New Athos, which was captured by the evil spirits in the form of invaders "[7].

Near the entrance there is a monument to a local resident who has guarded the cave for many years.dle templates freefilm online
Tours